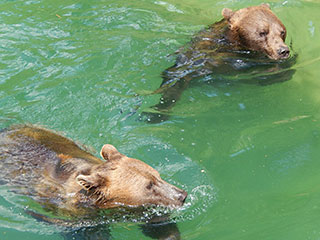 Bärenpark
Cross the Aare from the Old Town and you'll find yourself in the company of three brown bears. Bern has long had an affection for bears, and the animal was adopted as an emblem as long ago as the 12th century. Bern has kept its own bears since at least the 16th century, and they were moved to this park on the opposite bank of the Aare in 1857. The habitat was modernized in 2009, when a new space was opened next to the original pit. The two enclosures are linked by a tunnel, and even allow the bears to take dips in the river. 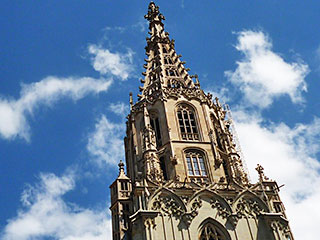 Bern Münster (cathedral)
Switzerland's tallest cathedral went up gradually during the 15th and 16th centuries. The single spire soars to more than 100 meters. Climb the 400-odd steps to view the distant, snow-capped Alps. The Last Judgement will greet you as you enter - the astonishing set-piece on the main portal, held as one of Europe's greatest groups of Late Gothic sculpture. In the tympanum you'll see how the wicked are separated from the virtuous by the Archangel Michael, while Jesus, Mary and the Apostles look down from the archivolts. Inside you can admire the 16th-century carved choir stalls and the "Dance of Death" stained glass window. 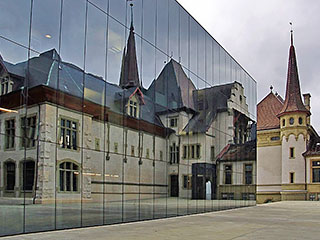 Bern Historical Museum
Switzerland's second largest museum, the Bern Historical Museum hosts historical and ethnographical collections going back to the Stone Age. These are housed in a Neo-Renaissance building, which has a modern extension for temporary exhibitions. The integrated Einstein Museum is a must-see, containing lots of footage, photography and objects illustrating his time in Bern when he devised his Theory of Relativity. 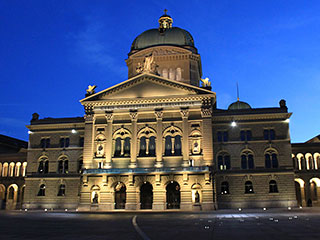 Bundeshaus
In Switzerland's capital you have to make time for the Swiss Federal Assembly which is home to one of the world's oldest democracies. The Bundeshaus was completed in stages throughout the second half of the 19th century. If you want to see inside you'll need to book in advance as the tours fill up quickly. The interior is even more impressive than the dominant Neo-Renaissance facade, and boasts sculpture, stained glass and carved wood. In front, on the Bundesplatz is a popular fountain with 26 jets, each one symbolizing one of Switzerland's Cantons. 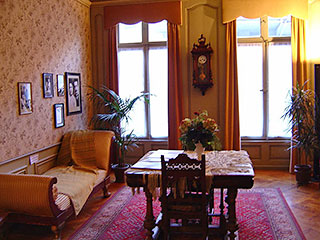 Einsteinhaus
Visit the second floor flat where Einstein lived from 1903 to 1905 with his wife Mileva Marić and son Hans Albert while he was employed at the Swiss Federal Institute of Intellectual Property. While living here, Einstein wrote his Annus Mirabilis papers, which changed the way we understand the universe. On the second floor the flat has been recreated with contemporary architecture, while there's more of a scientific theme on the floor above. This exhibition looks into the theories he developed in Bern, and has a timeline of his life. 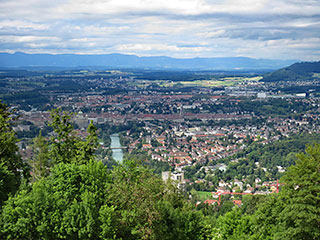 Gurten
If you're in Bern for more than a day you have to plan a few hours on the slopes of Bern's own hill, Gurten. There's a funicular (Gurtenbahn) that you catch by the Aare in Waben. This has been serving the 858-metre hill since 1899 and gets to the top in just five minutes. Summer means hiking and a ride on the miniature railway for little ones. 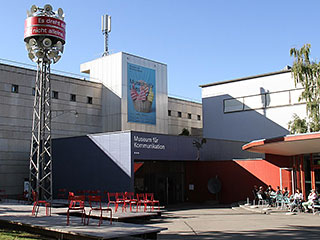 Museum Für Kommunikation
Just off Helvetiaplatz is the only museum in Switzerland on the subject of communication. Its origins lie in a post museum founded in 1907, and there's still an exhibition on this topic, explaining the postal network and showing historic coaches and postage stamps. There's also some archive correspondence, like authentic letters sent by Paul von Hindenburg. Another exhibition deals with media and features many interactive audiovisual displays. And there's an extensive area for telecommunications, complete with early telephones, telegraphs where you can decipher Morse code and vacuum tubes for sending messages. 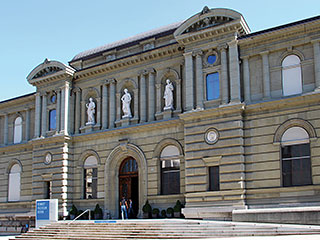 Museum Of Fine Arts
The oldest art museum in the country opened its doors in 1879 in a purpose-built Eclecticist hall. The earliest pieces are from the middle ages and the museum features movements up to the present day. In the collection there are 3,000 paintings and sculptures as well as almost 50,000 photographs, prints, sketches and pieces of video art. There's a batch of works by the Symbolist Ferdinand Hodler, and Expressionism is well-represented by Paul Klee, Franz Marc, Kandinsky, August Macke and Alexej von Jawlensky. 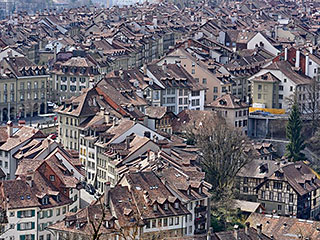 Altstadt (old town)
Most of Bern was claimed by a fire in 1405, and tall sandstone buildings took over from the old wooden houses. Many are woven with arcades on their ground floor, and these are a defining characteristic of the city. There are six kilometers of arcades in all, hiding shops, bars, cafes, and restaurants. One idea for a walking tour is try to find all 11 Renaissance fountains in the center. Each of these dates from the 16th century and has a polychrome statue of a real personality from the city's past, or an allegorical figure like Lady Justice. 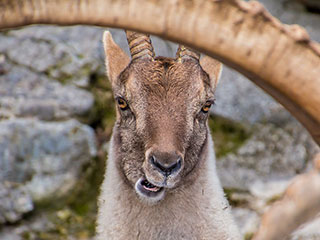 Tierpark Dählhölzli
Bern's zoo is just ten minutes from the Hauptbahnhof and it features a free and paid section: In the free enclosures beside the Aare you'll pass wild boar, chamois and ibex, as well as a small farm with domestic animals like horses and goats. The paying section has more exotic animals, but there's still an emphasis on European species. 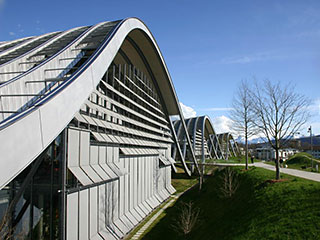 Zentrum Paul Klee
In Bern's eastern outskirts is a phenomenal modern museum for one of the most influential artists of the early 20th century. Klee was born just outside Bern and went to Gymnasium in the city. In 1997 his daughter donated all of her inheritance to the city, and Renzo Piano was hired to design a museum for these works. Looking like an oscillating wave, the museum opened in 2005 and now has around 40% of Klee's work, beginning with childhood sketches and continuing through his Expressionist, Cubist and Surrealist periods. Klee's paintings are presented in ever-changing temporary shows on set themes, so no two visits to the center will be the same. 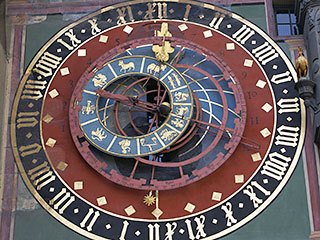 Zytglogge
Erected at the end of the 12th century as Bern's western city gate, this tower in the Old Town has become an icon for an extraordinary clock that was installed in 1530. One of the oldest in Switzerland, this measured standard time in the Canton of Bern, and has an astounding astronomical clock below. Get to Marktgasse on the stroke of the hour for a little show when some of the earliest examples of automata come alive beside the astrolabe. These mechanical figures, the astronomical clock and the clock itself are all controlled by the same mechanism. You can see it in action behind the scenes on a daily tour of the tower that starts at 14:30. Book in advance because numbers are limited.